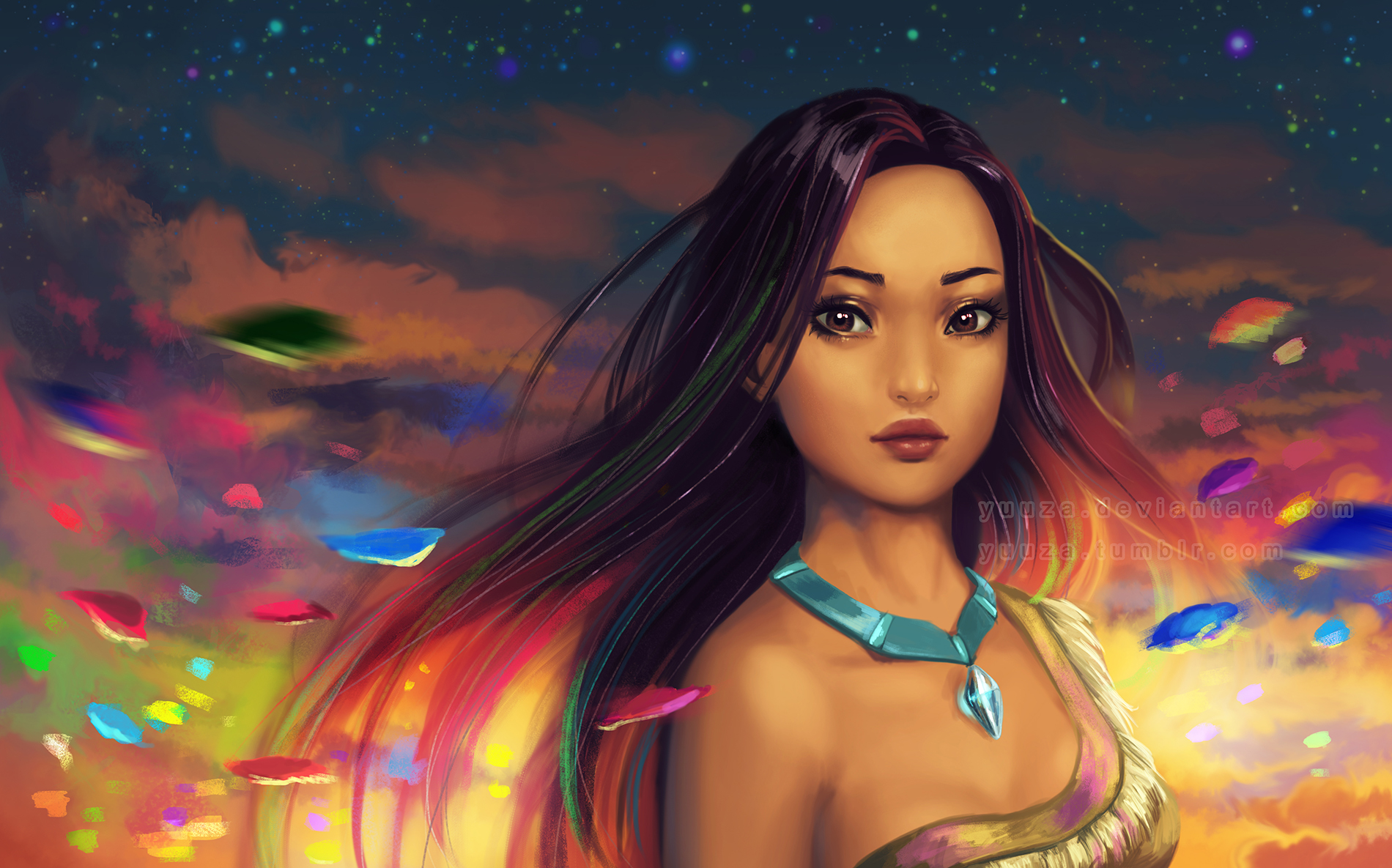 Yesterday was Thanksgiving. It's a day when we as Americans gather around the dinner table to honor the very first dinner between the Pilgrims and Native Americans. Of course, after that fateful meal, the settlers and the natives would go on to live happily ever after--until the natives were killed and had their land stolen.

So as a way to honor the original people who once inhabited this continent, I've decided to use this Fan Art Friday to share some fan art of Native American Disney characters. Granted, Disney hasn't always had a good track record of presenting the natives in a positive light. (Looking at you Peter Pan!) Here's some of the more "respectable" examples of representation.


If you’re reading this post, I’m currently out-of-town with the folks for Thanksgiving. To hold everyone over until next week, I’ve created this brief pre-scheduled post. Hopefully, I'll have something more substantial next week.

One of the strange things about Thanksgiving is that it’s one of the few holidays without that many holiday specials or movies. Unlike Christmas or Halloween, there are few, if any, holiday-related media. This is most likely because there’s not much about the holiday outside of getting together with extended family for a big dinner.

Chad Rocco of Familiar Faces managed to scrounge up a few of the rare Thanksgiving gems to showcase and discuss in his video essay below. Check it out:

Posted by The Magic Ears Dudebro at 6:00 AM 2 comments:


Do I even need to explain Frozen at this point? You already know what it is. You wouldn’t be reading a review for Frozen 2 if you weren’t already interested in seeing that movie, and you wouldn’t be interested in seeing that movie if you hadn’t watched the original movie. And of course you did! Most everyone did. When it was released, Frozen was the highest-grossing animated movie of all time—that is until the “live-action” Lion King surpassed it for some inexplicable reason!

So, of course, you watched Frozen! And if you did, you would know why that movie has become one of the most popular animated Disney movies of the past decade. You know it’s a film that serves as both a genuine classic Disney princess story as well as a deconstruction of said story and its tropes, especially “true love at first sight.” You know Elsa’s story arc and big musical ballad offers a bold message of female empowerment, especially for people who feel marginalized and misunderstood by society. You know the music is some of the best Disney has produced in recent years, especially that one song that people keep singing over and over again, despite most of them having long become sick to death of it.

So you know why Frozen is a good movie. Thus you also know why Frozen has become Disney’s biggest hit within the past decade. So you know why Disney would want to ride the coattails of the original movie’s success within the cultural zeitgeist by releasing a sequel to that movie. So now the real question remains: is the sequel any good? More importantly, is it better than the original? Will this sequel help reignite the passion of the original “for the first time in forever”? Or will this movie cause Disney to reconsider the Frozen franchise and “let it go”?

To learn if Frozen 2 creates a bigger, better flurry of a movie, click READ MORE:

Read more »
Posted by The Magic Ears Dudebro at 6:00 AM 2 comments:

Fan Art Friday: Into The Unknown

Frozen 2 opens in theaters today. Will the sequel be just as great, if not better, than the original? Will it allow moviegoers to feel the magic "for the first time in forever"? Or will it be so underwhelming that people will "let it go"? (Sorry! I had to make the obvious puns!)

Again, only time will tell. Keep a lookout for my review of the movie in the near future. Until then, here's some Frozen fan art.

Here’s a quickie of a Throwback Thursday! Frozen 2 releases tomorrow in theaters. With the second Frozen movie comes a second chance to see everyone’s favorite talking snowman, Olaf. (Or at least second favorite if you count Frosty!)

But long before Olaf sang about how in summer he’ll be a—happy snowman!—Disney offered a performance on television about another happy snowman. No, I’m not talking about Frosty. I’m talking about a musical number from the original Mickey Mouse Club.

To watch a musical number about a “happy snowman”, click READ MORE:


I’ll be honest. I’m not a hardcore Star Wars fan. I like the original movies. I even like the prequels. And so far, I consider the new movies to range from mediocre at worst to groundbreaking at best. Of the four movies produced by Disney, only one proves exceptional.

The Last Jedi stands out for subverting both tropes and expectations. The Force Awakens provided a fun romp, but offered nothing new, opting instead to copy familiar story beats. Rouge One was big on special effects and fight scenes but severely lacking in story and character. I didn’t even bother watching Solo. Han Solo may be my favorite character, but I don’t see the point of watching a movie about him (especially one not starring Harrison Ford) outside of pandering fan service.

As for the upcoming movie, The Rise of Skywalker, I remain cautious about it but teeter towards pessimistic. Being the final movie in the sequel trilogy, and with the previous two movies being disappointing and breathtaking respectively, the movie can either hit the landing spectacularly or flop embarrassingly—and with the screenwriter being the same hack who cursed the world with Batman Vs. Superman, I’m not too optimistic.

Outside of the main movies, I haven’t consumed any other Star Wars media. I haven’t read the novels. I haven’t read the comics. I haven’t watched the animated television series. I haven’t played the video games. The only other media I have engaged in are the attractions at Disney World, both Star Tours and the new Galaxy’s Edge. (BTW, the new park is awesome!)

I say all this to explain that I’m not a hardcore fan, simply a “dirty casual.” I’m not engrossed in the Star Wars lore. So I can’t say I was anticipating the new series that recently premiered on Disney+. As such, I don’t have any real expectations, neither high nor low. If anything, that probably makes me the best candidate to review it, as, not being blinded by nostalgia goggles, I can offer a more objective take as a blank slate.

So how is The Mandalorian? Is the series worth a Disney+ subscription? Will it take fans to new heights within a galaxy far, far away, or will it have sad internet fanboys within the Fandom Menace screaming “NOOOOOO!!!!” before airing their grievances in an hours-long YouTube video? (Yes, the fandom is that super toxic!) Let’s strap in and go into hyper-speed with this first impression.

To learn whether or not this original series will keep Disney+ subscribers hooked, click READ MORE:

Fan Art Friday: For The First Time In Forever

Six years have passed since Disney released Frozen, its biggest and greatest animated blockbuster of the past decade. Now six years later, Disney is set to release a sequel. Will it capture the same ice-based magic as the original movie? Only time will tell. For now, let's celebrate the upcoming release of the new movie with some Frozen fan art.

Throwback Thursday: Walt Disney And You (Plus Disney+)


This week saw the launch of Disney’s new streaming service, Disney+. The new service features all of Disney’s animated movies, most of its live-action movies, all of the Star Wars and Marvel movies, and even several original productions like Star Wars’ The Mandalorian. However, before streaming, and long before DVD and Blu-Ray, if you wanted to watch a Disney classic at home, you watched it on VHS.

The Walt Disney Company began distributing its movies on home video in 1980. Chances are if you grew up in the early 1980s and popped in a Disney VHS tape, you were greeted with a catchy musical number called "Walt Disney and You". What’s the story behind this promo? And why did it showcase so many obscure movies?

To learn more about this most nostalgic and iconic promo of the early 1980s, click READ MORE:

Read more »
Posted by The Magic Ears Dudebro at 6:00 AM 4 comments: